In December RoboWars announced a Sportsmen event to be held in Hamilton, Queensland. Below is a collection of photos and diary of the event from my fuzzy memory. 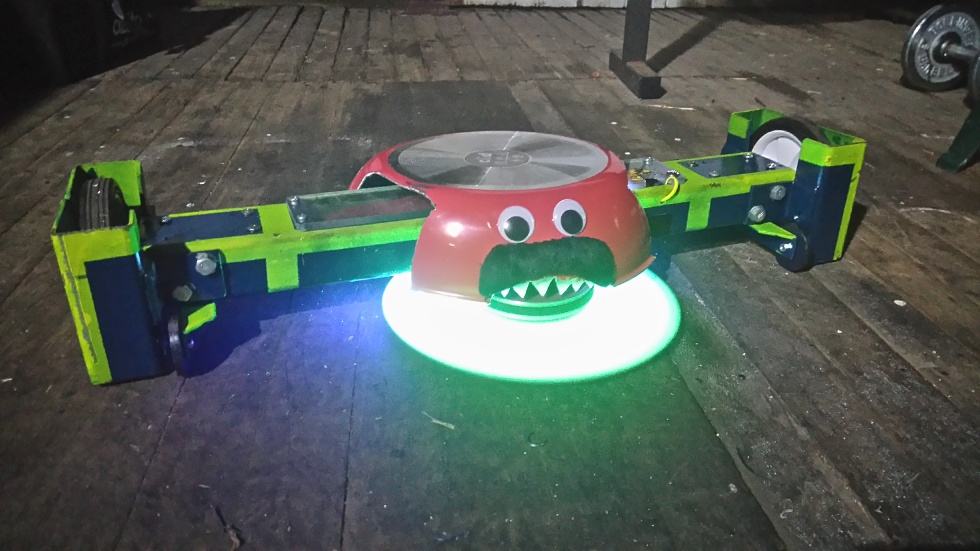 Other than driving The Verdict for 30 seconds prior to leaving for the event a day before, I was going into this one blind. And it really showed. I’m super rusty with my driving, doing a lot of weaving instead of straight driving, spinning in circles from over shooting when turning (Really should have put some steering rates into the radio) and I noticed one side was a little bound up compared to the other (it pulled to one side when going forward).

There was a lot of dancing around as I tried to pin Pothead to the wall so I could wail on it with the hammer, but it was actually hard to push to the wall without it slipping off the front. Eventually I managed to get a few decent hits, mangling the pot easily.

Pothead’s saw was scratching the paint in the corners when we collided but did nothing more then that which was nice. However by the timer ran out, the judges has decided the winner was Pothead. It went the full three minutes and didn’t fail, so I consider that a good start to the event. Back in the pits, I just tightened all the nuts and bolts to ensure nothing was going to fall apart and then charged the battery, ready for the next match

After the Pothead match, I dug into the menus of the radio and dialed in some rate limiting on the steering to try to reduce the twitchiness. Raptor is a full fat featherweight that swapped out their usually vertical discs for a pair of saw blades and wedges…… (I wasn’t expecting these since it was a sportsmen event, but the EO allowed it.)

There was a lot of back and forth, sparks and hammering through out the match, there was a moment where they actually wedged me up and onto the weapon, which missed the internals my a few millimeters. After that, as it was clear the wedgelets were not something I could defeat, I just focused on pushing against their weapon, trying to hammer, stall and push them where possible. For the last ~30 seconds, I just jammed the weapon down on them to clamped on (The APD speed controller did well here, the thermal/current limiting saving it.)

Sadly, the judges gave it to Raptor.
Once again, there was no real damage other then a slice into the tongue on the robot and some more scratched paint.

Unfortunately we are now out of the competition, so we can only compete in exhibition matches and melees.

It was a big push to get the robot finished on time, including wiring it up in the motel the night before!

Welding in the dividing walls for components, all make of 3mm Aluminium.

Dummy fitting where all the parts go.

It’s been a bit quiet here as we’ve been busy!

Then drilling it out

Then making some bushes

Machining the weapon timing pulley. A 36T pulley to give the weapon a 2.4:1 reduction.

The weapon motor mount… an after thought…

After cutting the upright and tack welding it in.

Batteries arrived, this will give Knightrous a 12S 2.2Ah capacity.

This decision was something I had been holding off, on doing for a while, but it became inevitable with the requirements for this robot. The drive and wheels must go close to the weapon axis and it needs more space to fit them. So the original chassis and wheel guards had to be removed….

This left it looking very bare, but it did make space!

I’m still undecided on which drive configuration I’m going to decide on.

The spur gears are a very simple setup, uses off the shelf parts and will be easy to repair and service

The planetary gearboxes are more expensive, require some modifications but have a nice and simple form factor that suits the robot.

The new wheel guards tack welded in. More bracing and reinforcement to come!

Getting testing the weapon assembly.
Playing around with the low speed startup on the APD controller.

Tacked into place until final sizing and triming is done.

With the bracing on the back, the drive can now start being setup

Just a quick mock up, but it’s the rough plan

Completed a lot of welding and made some things very permanent.

Side supports and armour welded to the chassis and uprights

Fully welded uprights around the shaft and side supports.

Awaiting some parts to arrive now, so it’s time to move onto the drive.

Had to get brutal with the grinder again. Removed all the weapon assembly and cut all the sections of the lower chassis that are not required.

Welded in the sections that are remaining.

Hoping to start welding in the uprights permanently tonight, the progress onto finalising some parts of the weapon like motor position and belt lengths.

Sent the Hardox 500 uprights off to Glen to have 30mm holes bored into them for the weapon shaft bushes to fit Then tack welded the assembly back onto the chassis for alignment.

Started making an MDF template for the side armour/brace. It’s an awkward shape.

First one cut from yet more Hardox 500. A few errors in the temeplate will require a bit of gap filling with the welder, but that happens

Closer but the gaps are pretty noticeable from here…

Both sides cut out, aligned into place and tack welded.

And once again a quick reminder on where things should go….

While everyone was having the pleasure of competing at RoboWars Brisbane, I had to settle for a long weekend in the garage.

Have to start some where I guess.

Mocked up a hub + pulley for the weapon.

Using some offcuts to position things to roughly where they will go.